The strength supporting your business

The strength supporting your business 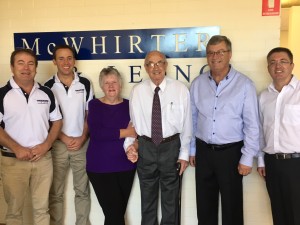 Founded by Cliff McWhirter, McWhirter and Leong was established in 1966 in Narrogin as CLB McWhirter & Co.

In April 1977, Joseph Leong joined the firm with a degree in Bachelor of Business and by 1981 the name was changed to McWhirter and Leong. Joseph was granted the designation of Fellow by The Institute of Chartered Accountants in Australia in 1992 and advanced as managing partner of the firm from 1987 until 2012.

As the firm grew over the years, more employees were admitted as partners including Dale Abbott in July 1998, Brian Evans in July 2002 and Mark Sewell in July 2012. After Joseph retired to become a Senior Consultant, Dale Abbott replaced him as Managing Partner up until today.

In 1955, Marsden Business Solutions was founded by EG Hams. Doug Hepworth and Partners purchased the firm on 28th February 1977 and began trading as DJ Hepworth and Associates. On 1 July 2000 the name of the firm was changed to Marsden Partners Katanning and Joy Choudhury was introduced as a partner.

The firm’s name was again changed to Marsden Business Solutions on 1st July 2005. On 1 July 2007, Matthew Peck was admitted as partner while at the same time Doug Hepworth retired.

On 1st February 2013 Marsden Business Solutions was restructured with Joy Choudhury resigning and the firm of McWhirter & Leong coming in as partners.